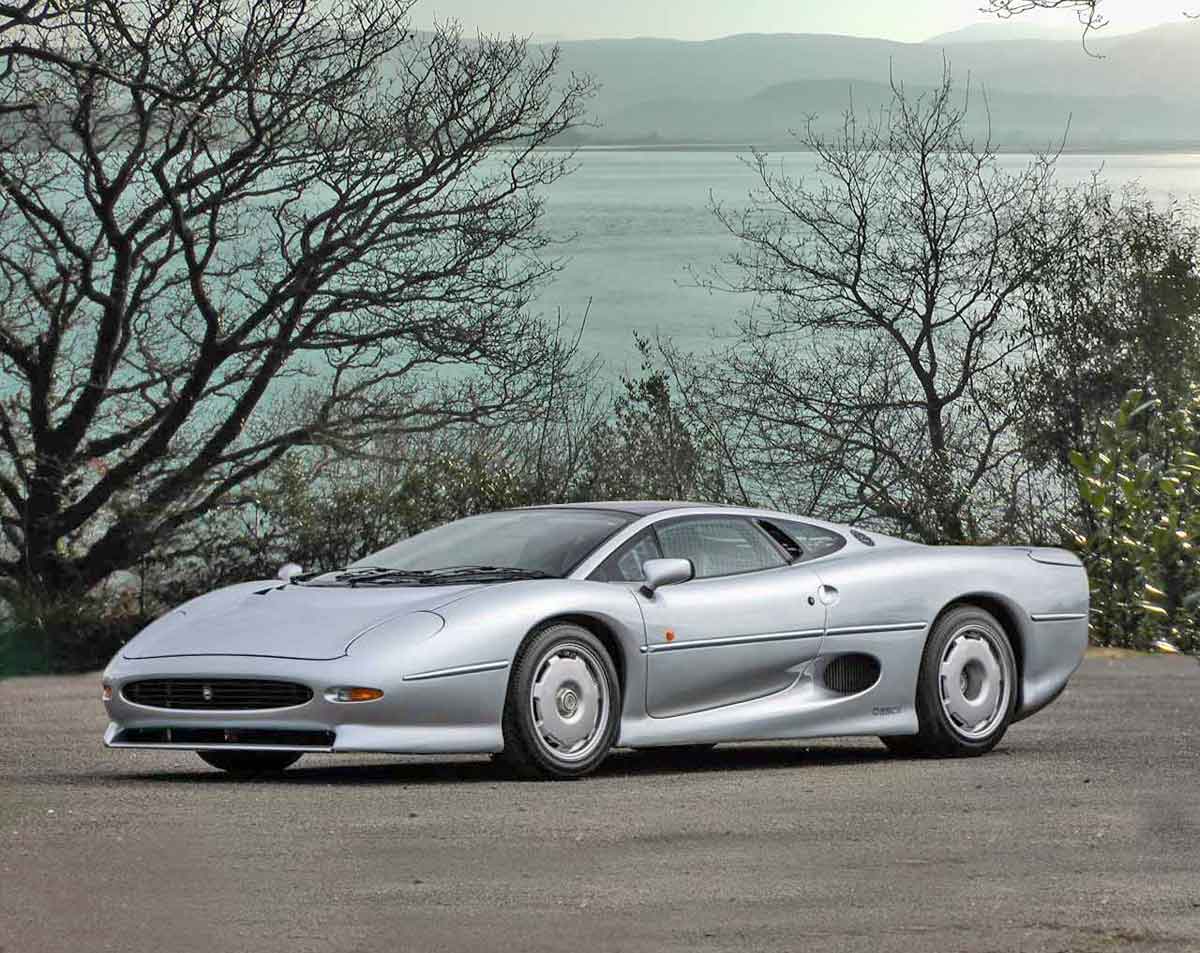 Around the mid-1980s a group of Jaguar engineers, who belonged to a very exclusive group called the 'Saturday club' got to talking about the possibility of creating a car for a new racing category, the 'Group B'. This was designed for supercars with far less regulation than existing groups; however it was pretty short lived because of a series of tragic accidents caused by overpowered cars on unsuitable racetracks in the hands of determined drivers. By 1986 it was defunct. However manufacture of a concept car, labelled the XK 220, still went ahead.

This car was built by hand and, perhaps just to show what Jaguar was capable of, it was exhibited at the Birmingham Motor Show in 1988. It caused a sensation and was undoubtedly the most popular exhibit in the whole show. Jaguar decided to go ahead with a limited production run, and orders flooded in.

This was to have been a two seater car with a centrally mounted V 12 engine, all wheel drive and scissor doors. Each one was to cost £470,000. Prospective buyers were to pay a £50,000 deposit immediately, and it was claimed that 1500 actually did so despite the fact that the car was not expected to be available until 1992.

The problem was that it is one thing creating a concept car by hand, and another putting it into full-scale production. Firstly the scissor doors proved difficult to manufacture and unreliable in operation so they were shelved. Four-wheel-drive was looked at again; the conclusion was that it would be unnecessary and could cause maintenance issues in the future. That went out of the window as well. The kiss of death however was the discovery that the V12 engine couldn't possibly comply with emission regulations; so that was dropped too and a turbocharged 6.2 litre V6 substituted. Even with this engine the car could not comply with American regulations so it couldn't be sold there. As if to add insult to injury the car came with a manual five-speed gearbox, at a time when supercars were expected to have six speeds.

Cancellations rolled in. Jaguar decided to limit production to 360 units but even this proved overambitious and finally just 280 were sold between the launch in 1992 and the end of production in 1994.

Was it a good car? Well it was certainly a big one. At over 16 feet long it was a full 2 1/2 feet longer than a Porsche 959, which meant that it would be far less nimble than it should be and would be an absolute pig to park. Once the driver had managed to squeeze into a large enough parking space, a poor door design (they wouldn't fully open) meant that it was very difficult to get in and out of, and although the driver and passenger (who incidentally was not, unlike the driver, protected by an airbag) were reasonably comfortable once in the car there was very little stowage space. With it being a mid-engined car it was expected that there would be stowage room at the front, but this is where two big fans were situated and a prominent notice warned that no stowage there should be attempted under any circumstances otherwise overheating would occur. The boot at the rear of the car was tiny. And we haven't mentioned the maintenance bills yet ...

Against that; yes, for a year or so it was the fastest production car available; but even then the name XJ 220 was a misnomer; no one ever managed to squeeze 220 mph out of one and a maximum ever recorded was 217 mph. Not bad, but not what was promised.

It didn't help that a journalist who was road testing one missed a gear change and this completely wrecked the gearbox; not something that a prospective purchaser would want to have to worry about!

The XJ 220 was a financial flop and is one of the least known supercars of the 90s, and for many years was even ignored by collectors.